The new club had a nucleus of local enthusiasts and it was not long before publicity in the local press helped raise interest in the sport.  Most of this interest came from beginners so it fell to two of the original founders to undertake the necessary training.  And so it began.

Records show that the club grew from 11 to 17 in the first seven months and the club managed to arrange ten fixtures in the first season.  Not surprisingly there were mixed fortunes for the new club.  The members were competing against experienced archers from well established clubs, but there were enough successes to encourage these novice archers to continue and improve in their new chosen sport!  At the end of the first year the club was able to hold its first annual championship attended by twenty members.

Year two saw individual members gaining success.  For instance, two club members (daughter and mother) gained the Ladies first and second places respectively at the Kent Archery Association’s field shoot in May 1957.  It should be noted that the trophy cup was brought back to Bromley for the second time when another Bromley Lady won the same competition in 1958.

In May 1958 the club inaugurated its own junior section open to youngsters aged from 9 to 18 years old.  However, the demand was so unexpectedly high that the club had to put a temporary hold on applications!  The junior club was a roaring success and in August of the same year a Bromley junior won the Kent Junior Championship.

The club’s organisational skills also developed nicely and the club was honoured in 1961 by being selected to host the inter-county match between Kent, Surrey and London.

Both the club and its individual members continued to achieve success and 1962 saw the first club member achieve Master Bowman status.

From 1963 onwards the club’s "scrapbook" of news cuttings shows page after page of continuous achievements in target, clout and field archery at all levels from local to national.  International recognition was also achieved when two club members were selected as part of the 24-strong team representing England at the French National Championships in 1967.

It was unfortunate that the club was forced to move its home ground because of land development or re-use.  The first move was to Farnborough Village in about 1975 and the next move was to Sidcup Sports Club during the 1980s.  Club members from that period retain strong memories of this latter venue.  In summer months it was idyllic but for the rest of the year it resembled a quagmire due to poor drainage.  If an arrow missed the target it was automatically regarded as lost in the surface water and mud.  Wellington boots were an essential extra piece of the archer’s equipment!

In 2002, the club was forced to move yet again when its shooting ground was sold by the owners for housing development.  Following a desperate search for an alternative home the club finally moved to its current home ground at Whitefoot Lane, Bromley.

These moves must have caused some degree of unrest and insecurity for the club members and may have been the reason for a reduction in member’s enthusiasm.  At this point the records show combined club membership of about 24 senior and junior members.

The new ground at Whitefoot Lane is much larger than the previous venue and allows the club to widen the archery disciplines it can support.  That, together with improved formalised training facilities, better equipment and organisational changes, has been instrumental in breathing new life into the club and causing a dramatic increase in membership.  The level of success was such that the club was forced to cap membership in 2005 to a maximum limit of 150 members!

The club now supports recurve, compound and longbow archery disciplines, and is able to hold target and clout shooting on its home ground.  On occasions it is also able to hold field archery shoots on its "micro" field course in the small wooded area that is part of its ground.

The club encourages its members to take part in all archery disciplines and has developed good relationships with other clubs that are able to offer our members the opportunity to join in at their venues for various types of shoots.  It is now common for club members to travel within the UK and abroad (e.g. France and Holland) to compete in field shoots, roving marks and target shoots.  Some members have also competed at more unusual events like popinjay.

The club hopes that it will continue to thrive and promote archery for the benefit of individuals and families.  It is an "open" club and does not discriminate in any way irrespective of class, creed, age, gender or disability and it intends to maintain for the future its facilities for beginners and established archers alike. 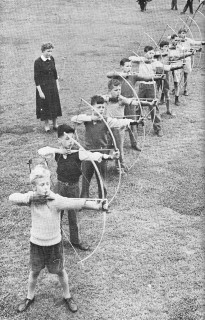